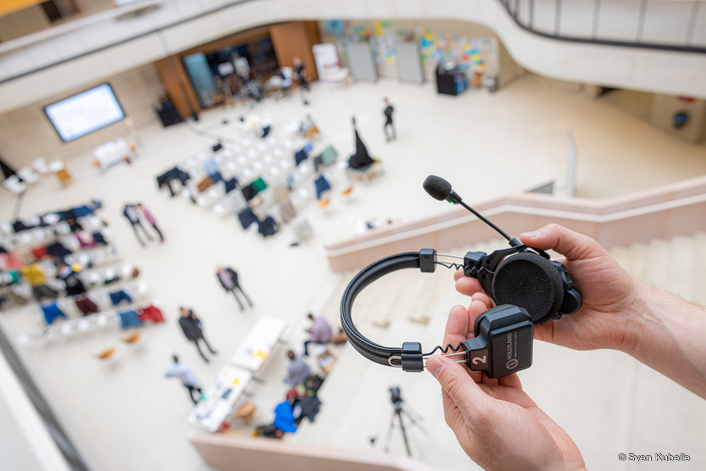 Some time ago, Hollyland launched the Solidcom M1 intercom system for professional applications. With the Hollyland Solidcom C1 system, the manufacturer has now developed a real plug-and-play system that should be of interest for smaller productions. We found out what the system does in practice.

Compared to most higher-priced systems, including those from Hollyland itself, the Solidcom C1 is very compact and does not require a separate base station, as a master headset takes care of that. Up to five additional headsets can be used with this master. The kit is available in different versions. 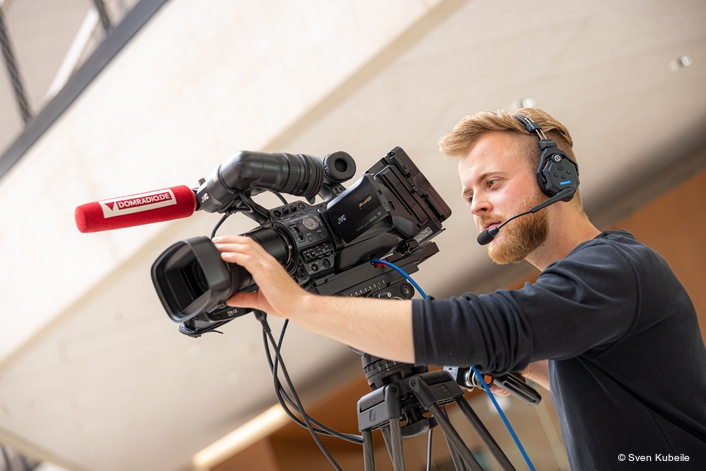 We tested the probably most common variant, which includes four headsets, replacement ear pads, eight rechargeable batteries including charging cradle and a small fabric case. Separate base stations can also be added for larger setups with different groups. A base station can connect up to 8 headsets with each other. If more headsets are required, up to three bases can be interconnected.

The setup of the system is extremely easy and does not require specialist staff for setup. Having taken it out of the case, stickers on the headsets identify the master headset. After the battery is inserted, the headset has to be switched on using a slider. If all other headsets are operational, they all connect automatically.

Continuous transmission is activated by folding down the microphone. All connected devices can transmit and listen at the same time. An LED on the microphone provides information about the status of the headset. The volume can be adjusted as desired using buttons on the side. If the system is set up with several bases, it is possible to speak in two separate circles.

In order to be able to put the intercom system through its paces, we used it in two real-life scenarios. First we used it for a live stream in a vocational college, a small production with mobile direction in a classroom, four Panasonic remote cameras and a camera operator. In the second scenario, the system served as a replacement for Motorola radios. All four headsets were used by production staff for set-up and dismantling as well as during ongoing broadcasts. 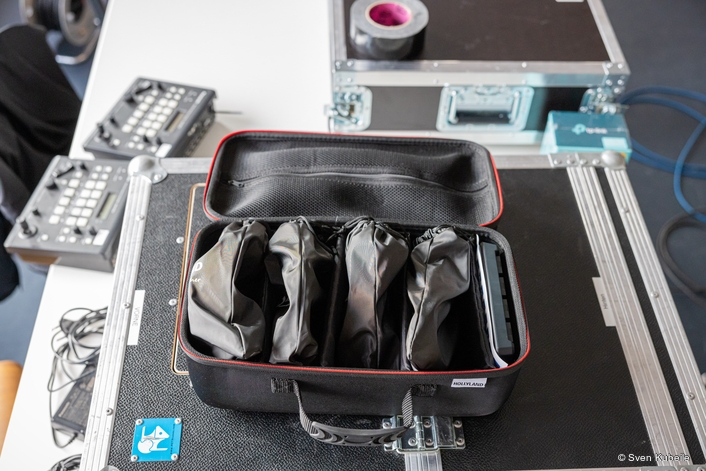 Despite thick concrete walls and a distance of several floors, the connection never broke - and that without the base station with larger antennas. The system works with DECT 6.0 and transmits at 1.9 GHz. In a relatively quiet environment, communication was always possible, despite having to whisper. The headsets were also used in the mobile control room to communicate internally or with the camera crew.

For both scenarios, the Solidcom C1 presented itself as a suitable, reliable and slim intercom system. The range was excellent in both cases and there was even range to spare. Of course, it makes sense to ensure that the master headset is within easy reach of all other headsets when using it. However, the theoretically possible 350 meters were never exhausted. 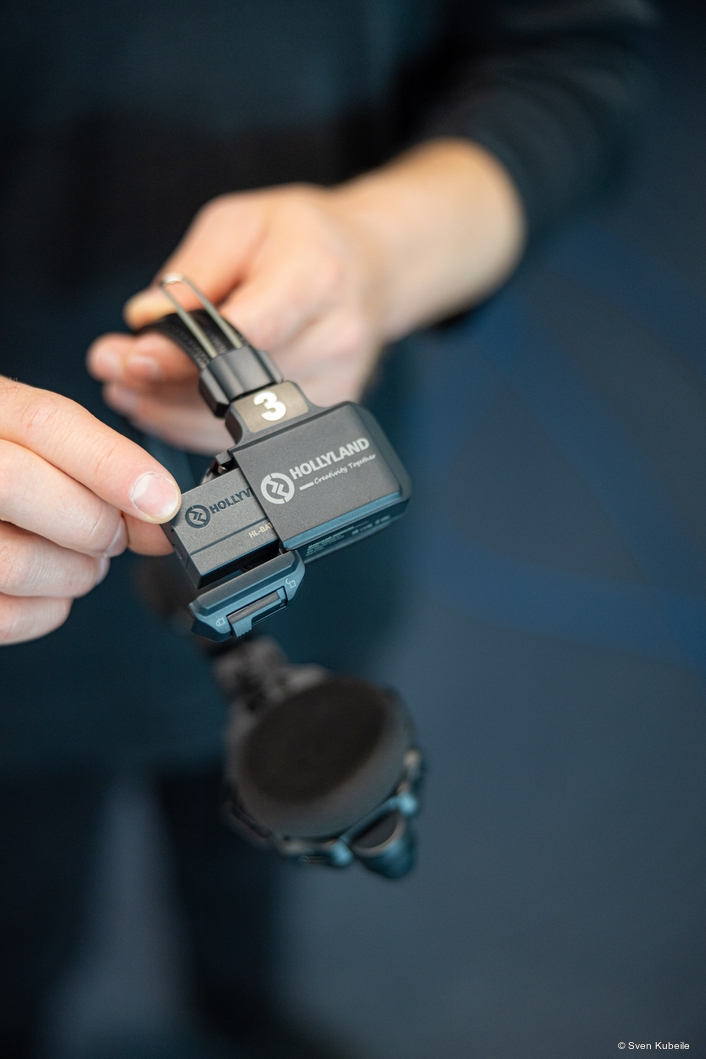 Speech intelligibility was very good and I felt that the frequency response was even more balanced than with more expensive systems such as Hollyland's Solidcom M1. Those involved in the production were surprised by the quality of the audio transmission and were completely convinced by the system, since in their experience communication with radio devices had been more complicated in the past.

The second test scenario was a mobile TV broadcast, which took place on Cologne's Roncalliplatz right next to the Cologne Cathedral. Among other things, two manned cameras were used for this. They were positioned near the stage, which meant loud noise input. In addition to the two cameramen, the vision mixer and the director in the OB van also wore a Solidcom C1 headset. This posed a special challenge for the intercom, because while the two cameramen almost had to shout in their noisy surroundings, while the colleagues in the OB van did not have to raise their voices. 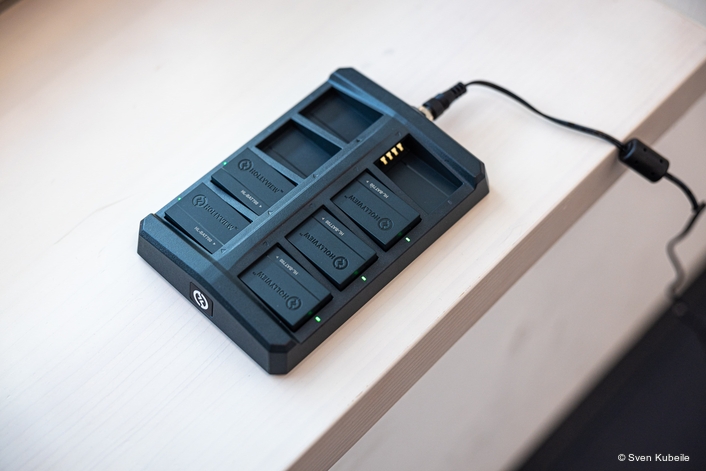 Nevertheless, an understandable signal had to arrive at every point. Another plus of the system is the battery life of the system. The package includes a practical charging cradle with two batteries per headset, which can be charged via a Schuko connection. The store was very quick. The master headset is specified with six hours, a remote headset with ten hours. This was also not exhausted and a fresh battery from the charging cradle was used before the start of the transmission. 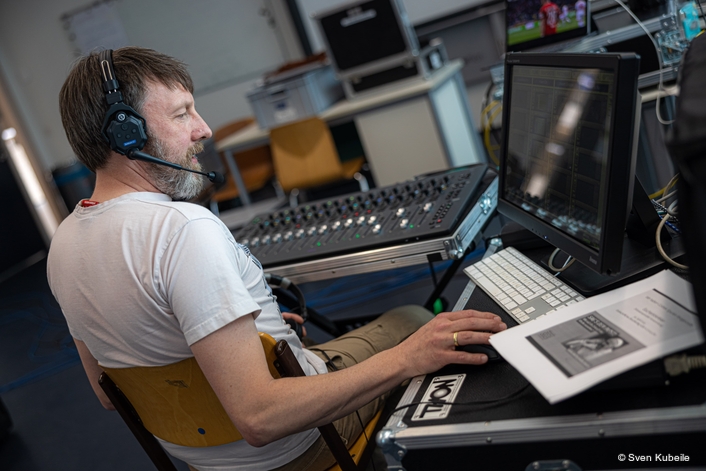 If you are looking for an intercom system for small live productions, film productions and events, you will be well served with the Hollyland Solidcom C1, especially since the price of the tested set only slightly exceeds 1,000 Euros. If there are many different groups and many intercom stations, then it would certainly make sense to work with more flexible and scalable systems such as the RIEDEL Bolero. Good speech intelligibility, easy handling and a small pack size make the Solidcom C1 a good alternative for all small productions.