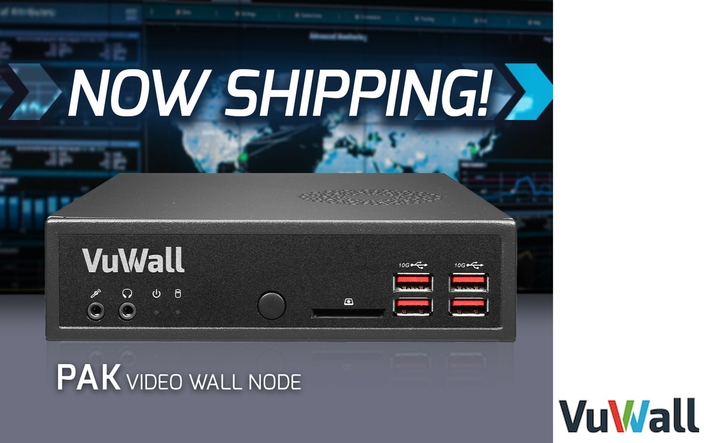 VuWall, a technology leader in video wall control systems and unified visualization solutions, announced that PAK™, an innovative solution for deploying and managing modular video walls in AV-over-IP environments, began shipping in early April. PAK is a networked, multi-decode node that can operate as a stand-alone device or can be stitched with other PAK nodes to build an IP-based video wall that is infinitely scalable. With the cost-effective and compact appliance, integrators can simplify video wall deployments by reducing the number of connections and eliminating a single point of failure — reducing project risk and offering improved reliability.

"Since we launched PAK a little over a month ago, the response has been overwhelming," said Mark Schmidt, chief technology officer of VuWall. "Many customers have already placed orders, and hundreds attended the PAK product launch webinar that we recently hosted. This is a clear indicator of how PAK fills a critical gap in the market for solving the complexities of video wall deployments."

About VuWall
VuWall, a global technology leader in video wall control systems and unified visualization solutions, has pioneered a new and disruptive approach to video wall management in AV-over-IP environments, bridging AV, IT and IP systems to seamlessly manage and control visual content throughout organizations. VuWall delivers a state-of-the-art ecosystem of video wall controllers, encoders and decoders — all managed by their unique and interoperable TRx Centralized Management Platform, eliminating the complexity of traditional video wall control and signal distribution over IP, with easy drag-and-drop operations and without any programming. VuWall is recognized for its innovative solutions that increase productivity and enhance visualization experiences in control rooms and corporate workspaces. Their TRx software sets a new industry benchmark in ease of use and deployment for the most effective distribution of any source to any type of display in professional and mission-critical applications. VuWall's award-winning solutions power more than 3,000 video walls in some of the world's most prestigious Fortune 500 companies in more than 45 countries. VuWall is headquartered in Montreal, Canada, and Reutlingen, Germany.